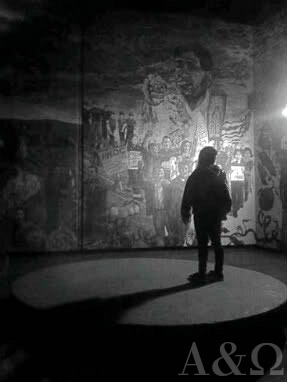 I took this picture of my best friend eight years ago at her little cousins middle school theater performance. It was intermission, and being the  restless teenagers that we were, we figured why not explore the school?

As we walked around the unfamiliar campus while talking about who knows what, I specifically remember my best friends words start to fade as she was speaking, which resulted in an abrupt halt that ended our conversation. Feeling oblivious I looked up from my phone to see what caused her to lose her train of thought.

She then turned to a mural as if she was on autopilot and proceeded to walk towards it in awe.

Considering we are best friends with many mutual interests, I too was taken away by the mural. I was so intrigued by the artwork that my legs started to move towards it before my brain could even register what was going on.

After I took the picture, we both stood in silence for a few minutes. Nothing was said, but we both felt complete and utter euphoria. That moment in time was one of the few instances when I realized the art of attraction. Attraction doesn’t always have to be physical, because after all it IS a feeling.

There are obviously things you should not let yourself get attracted to that’ll manifest problems in your life, but I am talking about the kind that gives us self actualization.

Since the caveman era our species has valued, or favored things that attracted us. Even though they didn’t fully understand it at first, they still wanted to. Why do we allow ourselves to get caught up in what attracts us as if there will be no consequence for our curiosities? You can argue that we have desires and in life we aspire to pursue what makes us happy, which is true.

Then again I feel as though there is more to it that just “I have needs that’s why.”

I think as humans, we like to be invested in something. After all love and belonging is in Maslow’s hierarchy of needs. We allow ourselves to be mesmerized by something or someone, just to run into people who share the same attraction. Whether it’s you and a friend talking over coffee, maybe commenting on a instagram post, reading an interesting blog by a freelancer you admire (See what I did there?) Whatever it may be, we let it happen because we want it to. Need I remind you there is nothing wrong with that, knowing what attracts you helps you discover new hobbies, potential friends, soulmates, even what your life’s calling is.

This site uses Akismet to reduce spam. Learn how your comment data is processed.

Art is All Around You 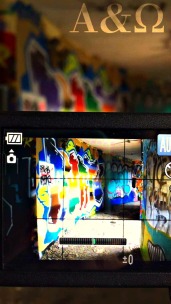 The Art of Attraction